Antibiotics have been used with relatively good effects as prophylactic therapy in decompensated cirrhosis. However, these non-selective strategies are leading to increased resistance in bacteria towards the most commonly used antibiotics. Rifaximin (RFX), a poorly absorbable antibiotic, seems to be a good alternative in many gastrointestinal diseases. However, studies assessing the effect of Rifaximin on the progression of liver disease have delivered conflicting results, showing major preventive effects in some patients, but no measurable effect in other patients. We are thus planning a combined Rifaximin / albumin clinical trial.

Albumin (ALB) is now recognised as an extremely important protein in liver disease: First, in terms of diagnosis and staging of liver disease, as some patients with decompensated cirrhosis may lose more than 2 g of circulating serum albumin per day into their gut, most likely via leakage due to increased gut permeability. Second, as a standard therapeutic agent to treat decompensated cirrhosis. For example, albumin treatment is recommended in specific clinical situations, such as “hepatorenal syndrome”, “spontaneous bacterial peritonitis” and “large-volume paracentesis” (removal of several litres ascites). 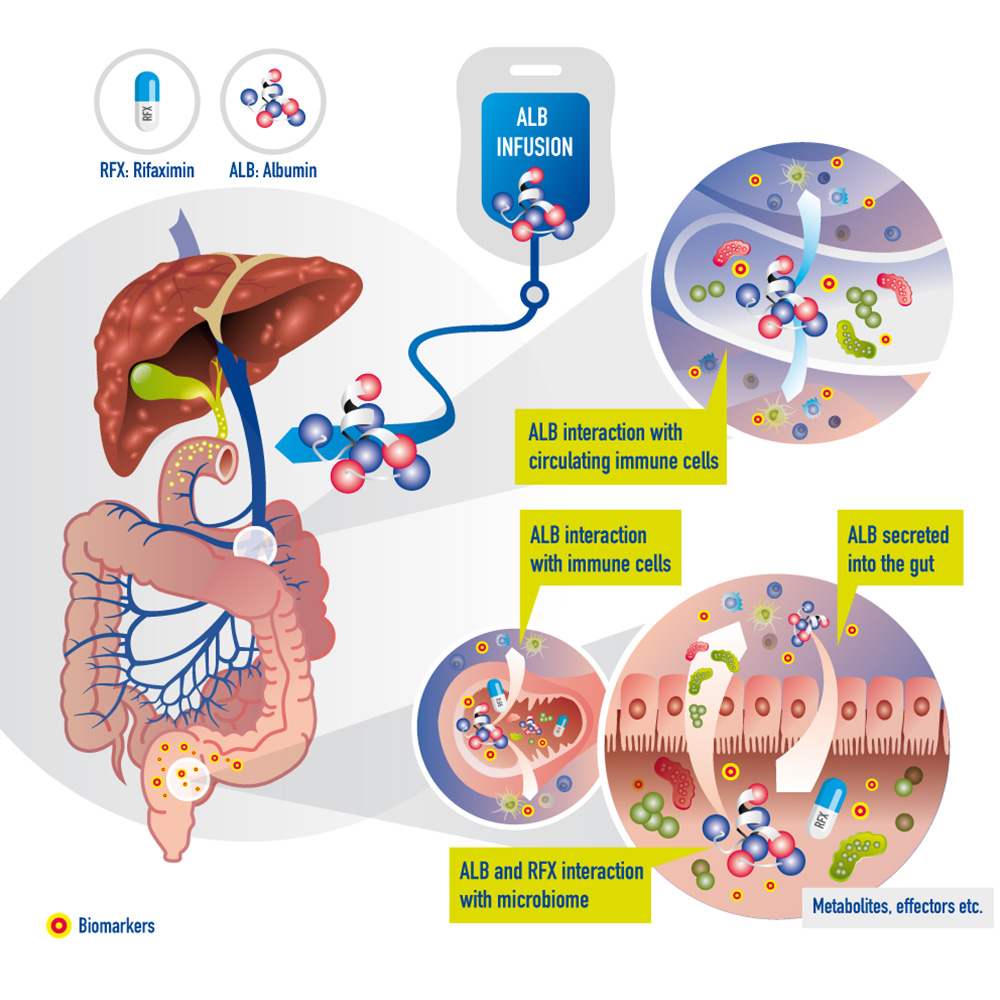 Interaction of Rifaximin and human albumin with microbiome and host in cirrhosis. Rifaximin is administered orally, while human albumin is infused, but is also excreted into gut lumen. Microbiome biomarkers might reflect the response to those treatments early on.

The immune modulatory role of albumin has been discovered only recently, in a study highlighting a mechanism by which albumin might improve immunity in liver cirrhosis (original publication). Until now, attempts to stratify patients for the use of albumin have failed, and new tools to predict the treatment response to human albumin are urgently required. Moreover, albumin and other molecules leaking into the gut lumen might influence and get metabolized by the gut microbiome. Albumin leaking into the gut lumen possibly alters the microbiome and indirectly the host. In addition, metabolites of albumin might be absorbed and affect the host, possibly altering the gut microbiome and thereby modifying mechanisms in the host (see illustration above).

MICROB-PREDICT will not only analyse markers of the patients’ response to albumin treatment, but will also gain significant and unique insights using in vitro and in vivo preclinical studies to understand the interaction of albumin with microbiota. Finally, MICROB-PREDICT will validate the biomarker signature, which predicts the response to human albumin, in a randomized clinical trial (ALB-TRIAL) to deliver guidance for the use of albumin in patients with decompensated cirrhosis in a personalized medicine approach.